If I asked you to recommend apps with incredible UI/UX, what would they be?

Well, if you ask me or my South American colleagues, we’d probably name a few popular apps from the United States and Europe: the continents that for years have been the biggest influencers in software design.

But what about products that aren’t quite as well known? How can we help them stand out for app UI/UX?

I sat with two of my colleagues who specialize in UI/UX at UruIT to try and break it down to list our top-five apps that were designed and developed right here in South America.

For the last nine years, PedidosYa has transformed the way food is delivered in Latin America.

The first delivery ecommerce website in Uruguay, PedidosYa rose quickly in popularity. In 2014, it was acquired by the German company Delivery Hero and expanded to more than 20 countries; to date, it serves over 15,000 restaurants and 400 cities in Latin America.

The app allows users to get any meal delivered to their door with a few clicks. On the restaurant side, owners are encouraged to improve their engagement with customers by using the app as a reliable channel for communication.

Without requiring registration, PedidosYa allows users to immediately explore its functionalities just by confirming their location. Following behavior design best practices, the app only asks for user registration information at the precise moment when users are the most motivated: right before confirming their order. According to behavior scientist B.J. Fogg, when you connect user motivation to certain triggers in your system, you generate a real opportunity to fulfill your product’s goal.

Interactions and animations in PedidosYa are simple and efficient, contributing to the app’s performance and experience. From the loading animation to the way restaurants are presented, PedidosYa maintains friendly and clear communication—a quality they’re known for. Even the smallest animation contributes to guiding the user; for example, when you tap on a restaurant, the animation expands to indicate the user is seeing all possible details.

Related: The importance of good animation in UX

The app’s error management encourages users to stay in the flow, avoid common errors, and complete their order with ease. Instead of just showing an error, the app compels users to complete the required steps to get out of it themselves. You can also communicate directly with PedidosYa by clicking on the help option, where there’s a customer service rep available 24/7.

Customer reviews and other relevant information are listed in a clear, appealing way. By browsing the home and restaurant pages, you can get all the information you need to decide what you want to eat: restaurant names, locations, menus, ratings, etc. To avoid disappointment, you’re limited to the restaurants that deliver to your current location.

“When you connect user motivation to triggers, you generate opportunities to fulfill your product’s goals.”

The simple-yet-flexible UI supports restaurants by showcasing their cuisine in an appetizing way. In fact, PedidosYa will send over a photographer for restaurants who want to add pictures of their most popular dishes.

Innovation has been a fundamental part of NuBank since it started in 2013. This software brings to life the dream scenario: an uncomplicated, 100% digital bank. Credit card and account services all happen online, and there are no physical branches.

Guided by a simple onboarding process, you can request an executive account and credit card (free of charge) by filling out a form and uploading the necessary documents. Afterwards, all financial operations are managed through the app.

All user interaction revolves around simplicity, a concept that isn’t commonly associated with banks. It contributes to a delightful user experience, which is enriched by a coherent color, image, font, and element hierarchy.

Since all user interactions are based on typical mobile gestures, NuBank is a clear example of mobile-first software. Along with the app’s minimalist interface, this makes for a clean, agile performance.

The app’s users are primarily young, tech-y people. so some of the interactions aren’t fully explained; you have to discover them by exploring the app. Though fun for tech enthusiasts, this can hold less savvy users back. It’s an app with a learning curve.

NuBank is genuinely concerned with the customer experience. They’ve trained their users to understand that notifications are related to billing and shouldn’t be ignored. If necessary, users can count on the app’s chat function for support, which is managed by real people available 24/7.

“Simplicity contributes to a delightful user experience, which is enriched by a coherent color, image, font, and element hierarchy.”

A badass princess game from Uruguay

Last year the indie video game producer Pomelo Games launched its third mobile app, Once Upon a Tower. In it, the user plays a princess who needs to escape from a tower and defeat enemies on the way out.

Once Upon a Tower’s visuals are surprisingly different from other mobile games, which makes it habit-forming. In our opinion, the heavy dose of girl power adds even more points.

Related: An open letter to up-and-coming women in digital design

Once Upon a Tower’s UI/UX breakdown

When the user downloads and open the game for the first time, a short, charming video explains the trapped princess’s situation, and you learn to play as you go. The onboarding is part of the game, and instructions are given with context.

Defined by its producer as a “tower-smashing action game,” Once Upon a Tower differs from a classic mobile game in several ways. To start, there’s no home page; the main page is the game itself. As you advance forward, the interface refreshes. Even if you lose and have to start over, nothing is the same. The path, the enemies, prize locations, colors, and other UI elements constantly change. Boredom is not an option.

The beauty of Once Upon a Tower is that it’s a simple and fun adventure. With four easy gestures, you can do everything. There are no excessive screens and the game action is very fluid. From the music to the towers, the design and animation details guarantee a pleasant experience.

Besides the initial onboarding, there are no other tutorials or explanations. Although it can be tricky to figure out some tasks, the idea is that you explore and figure things out as you go.

In order to gain extra prizes or lives, you have to watch ads—it’s not fun, but the game’s ‘stickiness’ makes them manageable. Once you obtain more points, you’ll unlock new characters—all of which are princesses with different stories, nationalities, and looks.

A Colombian grocery app built by its users

Rappi was launched in 2015 as a product connecting people who need to buy groceries with small markets and corner shops.

As their head of UX likes to say, their team is obsessed with its users: every new feature is planned, designed, and implemented to fulfill their every need and wish. It iterated over time, and today Rappi allows users to get different kinds of products delivered in record time. The app has around three million users across Colombia, Mexico, Chile, Argentina, and Brazil, and is continuously expanding its product offering and locations.

The app’s value proposition is centered around the fast delivery of goods. To build upon this idea, Rappi’s team asked their users what else they’d like delivered—which is what inspired the team to implement the “Anything” field, where users can type whatever product they need and where it can be found. This user-focused growth mindset distinguishes Rappi from similar products: user feedback determines where or how the product will grow.

App improvements and new features are prioritized by users, based on user research and features requests. They listen to their customers: beyond user interviews and market research, they invite users to their office for an idea exchange brainstorm on a weekly basis.

Though there’s loads of products offered, the design team focused on helping users understand the product’s complexity by organizing the information in linear blocks with intuitive animations.

“They listen to their customers: beyond user interviews and market research, they invite users to their office for an idea exchange brainstorm on a weekly basis.”

The buying process works similarly to other Uber-like apps: once you decide what product you want, where it should be bought, and how you’re going to pay, the app starts looking for nearby delivery people, called rappitenderos. The rappitenderos receive the request in their own version of the app. Once a task is accepted, the app provides efficient delivery instructions.

A telecommunications app in Uruguay

Mi Movistar is an app from Telefónica, a global telecommunications company and long-time client of ours. In February, Telefónica reached out asking us to improve the app’s user experience: they wanted to to improve UX according to user feedback, refresh UI aspects, and set a roadmap of app improvements.

Once you download the app, the first thing you’ll see is an onboarding flow guiding users through the basics with fun animations and effective copy.

To use the app, you need to input your phone number so the system can identify your current contract. Depending on which contract you have, there are three different possible home pages with corresponding functionalities and interfaces.

“User research is what determines how products grow.”

With Mi Movistar, users can check their account balance, buy minutes, and pay their bill within the app. Additionally, users can easily compare Telefónica’s different packages, which are organized in lists by data type. Finding a package to suit their needs is simple and intuitive.

Colors, fonts, and other elements fit right into Telefónica’s international brand. By thoughtfully designing each feature, we made sure the entire interface aligns with the company’s aesthetic. This was an important evolution compared to the app’s previous version, which was very similar to the classic Android and iOS look.

This is just a small taste of the best apps of South America. Are there any others you think should be on this list? Let us know!

Want to read more about app UI/UX> Read on: 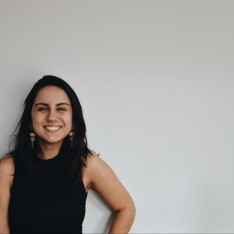 Claudia Samico
Cláudia Samico is a UX designer in UruIT, a nearshore software development company with over 10 years of experience delivering successful web and mobile apps for the US market. As a Brazilian living in Uruguay, Claudia moved to Montevideo a few months ago after working for almost four years as a UX Designer at Globo.com, the internet branch of the media enterprise Globo, in Rio de Janeiro.