Creativity is, according to popular perception, a mysterious and magical process.

Creative insight appears suddenly and unpredictably, like a flash of lightning from the heavens. It is impossible, so the common wisdom goes, to know when these creative bolts will strike or how to make them occur more often. Creativity is, as most of us have come to understand it, a random gift from God.

This is the “inspiration theory” of creativity. It is simple, and it is totally wrong.

Let me show you what I mean using one of the most commonly cited examples of this theory: Wolfgang Amadeus Mozart.

“The inspiration theory of creativity is nonsense.”

Mozart is often presented as a near perfect personification of the inspiration theory of creativity. Nowhere is this more visible than in the movie Amadeus.

Amadeus depicts Mozart’s bristling relationship with Antonio Salieri, who saw himself as Mozart’s rival. The movie shows a blindfolded Mozart as a child playing piano flawlessly to kings and popes. It claims that Mozart, a prodigy with mesmerizing talent, composed his first concerto at four years old.

In the film, Salieri toils relentlessly on his compositions, reworking them again and again. When he discovers that Mozart, now a young man, creates impeccable first drafts with no sign of editing or revisions, he is furious.

In one scene, Salieri gazes at a finished Mozart composition: “Astounding! It was actually beyond belief. These were first and only drafts of music, yet they showed no corrections of any kind… Here again was the very voice of God!”

Salieri was both awestruck and envious. Divine music seemed to just flow out of Mozart.

The film’s portrayal has its origins in a letter written by Mozart that was published in 1815 by a leading German music magazine.

Related: 101 quotes about design and creativity

The magazine’s publisher was an avid fan of and expert on the composer, telling all who would listen stories about how Mozart would compose in his head, without benefit of a piano.

In the letter, Mozart explained his composition process: “Provided I am not disturbed, my subject enlarges itself, becomes methodized and defined, and the whole, though it be long, stands almost finished and complete in my mind, so that I can survey it, like a fine picture or a beautiful statue, at a glance. Nor do I hear in my imagination the parts successively, but I hear them, as it were, all at once.”

This letter became a cornerstone of the inspiration theory mythology that grew around Mozart: the brilliant composer did not toil for his musical ideas; he was handed them by a mysterious Higher Power.

There is one problem with Mozart’s letter: It was a forgery.

The portrait of Mozart’s inspired brilliance came about as the result of an overly ambitious publisher trying to sell magazines. Johann Rochlitz was a German magazine publisher who had a deep reverence for Mozart and published countless letters and anecdotes that were purportedly from or about Mozart. However, later biographers discovered that many of his stories were exaggerated, and some, such as this letter, were wholly fabricated.

In reality, Mozart worked long hours in a highly iterative, back-breaking process. He described a set of string quartets he composed as the “fruit of long and laborious effort.” Mozart would create numerous sketches, the music composer’s equivalent of rough drafts, as he worked through the various parts of his compositions. Mozart even used a type of shorthand for drafting that made it easier for him to edit his work.

The idea that Mozart composed pieces entirely in his head was also not true. In his actual letters, he makes it very clear that he wrote at a keyboard, as he needed to hear the notes as he was working.

Another aspect of the Mozart myth was that he was a child prodigy, born with unprecedented gifts. According to Salieri in Amadeus, Mozart composed his first concertos at the age of four. In reality, the first piano concerto he “wrote” was at age 11, after years of daily focused practice insisted upon by his father. But these first pieces, it turns out, were not actually original, but instead were reinterpretations of others’ songs. His father began training Mozart in music when he was three years old, and Mozart’s first truly original concerto was written when he was 17 years old. This may still seem young, but at that point Mozart had almost 14 years of intense practice behind him. Fourteen years of long, daily practice is not the same as being simply born a world-class composer.

Debunking the inspiration theory of creativity

The inspiration theory of creativity is nonsense. It has been embellished and amplified for centuries by individuals who just couldn’t understand how something so beautiful and transcendent as a Mozart melody could be the product of hard work and conscious effort rather than divine inspiration.

“Once you realize that you are the master of your own creativity, the work can truly begin.”

When you examine the story of Mozart with a critical eye, his creative prowess looks not like magic but like muscle. Mozart trained, worked, and struggled to develop his creative skills. And his creations became legendary.

You too can create works of creative beauty that will last long after you are gone. It won’t be easy, and it won’t be quick, but it certainly is possible.

Related: How I beat creative burnout

But the first step toward unlocking the full spectrum of your creative palate is rejecting the inspiration theory. Once you realize that you are the master of your own creativity, the work can truly begin.

Adapted from The Creative Curve: How to Develop the Right Idea, at the Right Time © 2018 by Allen Gannett. Published by Currency, an imprint of the Crown Publishing Group, a division of Penguin Random House LLC. 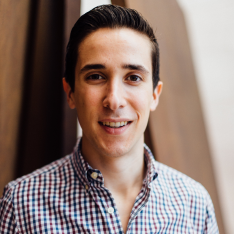 Allen Gannett
Allen Gannett is the founder and CEO of TrackMaven, a marketing insights platform whose clients have included Microsoft, Marriott, Saks Fifth Avenue, Home Depot, Aetna, Honda, and GE. He has been on the “30 Under 30” lists for both Inc. and Forbes. He is a contributor for FastCompany.com where he writes on the intersection of technology and human nature. Previously, he was a co-founder and General Partner of Acceleprise Ventures, the leading SaaS startup accelerator. He was also once a very pitiful runner-up on Wheel of Fortune. He is the author of The Creative Curve (Currency/Penguin Random House).