The evolution of UX research at the Wall Street Journal

The evolution of UX research at the Wall Street Journal


When Bonnie Jarvie was hired as senior web designer for Dow Jones in 1997, tech companies like Apple, Intel, and Microsoft weren’t yet included in the most well-known measure of the stock market’s health—the 30 companies that make up the Dow Jones Industrial Average.

We asked Jarvie to tell us about how technology has changed her work, how her team is improving corporate culture, and how she finagled one of those iconic stipple portraits.

You started working for Dow Jones, the parent company of the Wall Street Journal, back in 1997—long before the term UX even existed. How has your role changed over the last 20 years?

My first job here was to type in the Dow numbers at the end of the day using CSS and HTML, which meant learning on the job and doing things the hard way, and gave me a deep foundation in coding with tables and other things that no one does anymore. I’ve worked here for so long that not only did the company change around me, but I’ve changed with the company: I went from being a web designer to an art director to doing front-end coding and even dipping into marketing—when you’re in a big company, you have that luxury of working within a lot of different departments, so I’ve never felt like I was stagnating. I’ve never done the exact same thing for two years in a row—I’ve always been able to learn something new.

What are you focused on right now?

My team is reimagining the Journal’s desktop homepage. Right now, it’s got an ‘everything-but-the-kitchen-sink’ feel—you can scroll for days. From an editorial standpoint, everyone here wants their piece above the fold, or at least prominently located, which is great for them—but we need to prioritize our readers above all of that. So most of my brain power is focused on talking to subscribers and even nonsubscribers to get their impressions of the homepage to see how the offerings might be better.

It’s one of the things I love about my job—the fact that I get to be the advocate for our readers; I get to champion them and say, “This is what they’re asking for,” so that we’re thinking beyond our advertisers. And nine times out of ten, we’re able to follow through and provide users what they want.

And when you say “listening to what our readers are saying” does that mean web analytics, or even go beyond that?

We do in-person interviews and we work closely with our Customer Intelligence team to see what sort of feedback they’re getting, so I literally mean what they’re saying. Analytics show what people are clicking on, but what people say and what they do aren’t always the same thing. So it’s up to us to take all of that data, sort through the variables, and figure out what they truly want.

You’ve said that the design team is leading some of the culture change at the Wall Street Journal. Can you talk about that?

I’m so proud of what our team has been able to do. For one thing, we’ve all been in meetings where everyone is looking down at their phones or laptops and no one’s paying attention—then you get emails from people who were there, asking “What happened in the meeting?” It’s such a huge waste of time. So my team instituted a no-devices policy for our own meetings, we even had little notebooks made with a message from our CTO & CPO, Rajiv Pant inside to encourage people to put their phones away, hoping the idea will spread to other departments. We’re also focusing on fewer meetings and cutting down meetings to 45 minutes instead of an hour.

One big piece that I’m bringing to the effort involves using InVision Boards to increase cross-department communications. I’d been trying to find a way of collaborating that’s more transparent and inclusive, so no one can say, “I had a great idea, but no one ever asked me about it.” That sort of criticism may sound petty, but when people are making decisions and you’re not even invited to the meeting, it can really weigh on you—especially if you’re a creative person.

“When people are making decisions and you’re not even invited to the meeting, it can really weigh on you—especially if you’re a creative person.”

Boards serve as a sort of diary. Say you worked on a “hot” project four or five years ago, and it went through peaks and valleys and eventually fell through the cracks because of resources, but now it’s back on everyone’s radar, you can hit the ground running: all of that institutional knowledge is right there in one place.

Your Twitter profile mentions that you’re a dance instructor—this may be a stretch, but do you see similarities between your day job and teaching dance?

There is totally a connection. I think about user experience all the time, from hosting a party and making sure everyone’s having a good time to my last trip in and out of Philadelphia International Airport.

But to answer the question, yes: I’ve danced ever since I was a kid, and a few years ago I became a real Zumba die-hard, never missed a class. One day the teacher turned to me and said “I sprained my ankle earlier and I can’t teach the class, but I have 20 people who showed up and I can’t turn them away. You know the music, and you know the choreography—can you teach the class today?” I had a little heart attack and probably cried afterwards, but it went just fine. I got certified and I’ve been teaching Zumba for eight years now.

Dance is therapy for me, and it helps me to think creatively—I’ve come up with my own choreography, and I use UX thinking when I’m leading a class, because it’s all about directing people where to go. Two or three beats ahead of time I’ll hold my fingers up and do a spinning motion to indicate we’re about to turn, because it takes time for the brain to process that visual cue, and that thinking spills over into everything I do at work: you can’t surprise people and you can’t make people try to figure things out for themselves, because that’s a frustrating experience. They’re not going to be happy and they’re not going to be dancing.

Related: Why you should use design presentation boards

When you’re adding to your team, what do you look for when you’re hiring new people?

A sense of humor, and a willingness to say “yes” first and figure it out later, which is probably a reflection of who I am. I really like to work with people who are enthusiastic and excited to come to work—of course, that’s a specific personality trait and not everybody necessarily brings the same energy, but that’s OK: One member of my team is very quiet, but he expresses his enthusiasm in different ways that show he’s interested in a project. And if you’re excited about your work, regardless of your knowledge and experience, you’re going to be successful.

I also like people who recognize that they don’t have all the answers, people who are humble and who are willing to ask questions. And I like to give people their independence—you don’t have to come to me every day to check your work. Be fearless, but don’t be reckless. Wow, I sound like a bumper sticker! (Laughs.) But it’s true—those are the sort of people I want to work with.

Last and most important question: How the heck did you get a Wall Street Journal stipple illustration? I thought those are reserved for WSJ writers or celebrities and business moguls featured in articles.

After twenty years, I finally got one! I was the UX research lead for the team that created the iOS app, which just won a Webby award, which we’re all really proud of. As part of our push for culture, we wanted to remind people that even though this is a digital product you’re interacting with, there are human beings behind this work, so we reached out to Paul Kaplan, who oversees the various artists commissioned for the portraits, and we made sure every member of the iOS team got a stipple.

When it first happened, we were all obnoxiously excited to use them as much as possible, so we posted them on our Twitter profiles and mine is still on Medium posts, too. Now, it’s something that the Design and UX teams have to remember our successes forever. 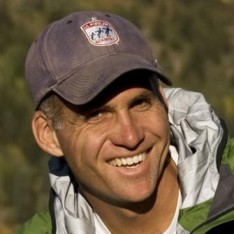 Scott Kirkwood
Scott Kirkwood is a freelance copywriter and creative director in Denver, CO, with a focus on do-gooders, graphic design, and the great outdoors. His editorial work has appeared in 99U, Communication Arts, HOW, and Modern in Denver.