The biggest mistakes copywriters and designers make when collaborating

The biggest mistakes copywriters and designers make when collaborating


Hands up if you’ve seen these two scenarios before:

This is hardly the picture of a user-centered creative relationship. But it happens all the time. When the two disciplines aren’t aligned, when there are personality problems, when the structure of the company prevents good work, or even when processes break down, [iunvTweet]the relationship between copywriters and designers needs to be protected.[/invTweet]

“A good relationship between designers and writers should forge designs that not only convert, but delight and inspire.”

This isn’t about whether copy or design comes first. That’s an important but parenthetical issue. The real decider is about how these two disciplines work together.

This is important, because copy and tone of voice are becoming a bigger part of what we do. With audio assistants and bot-related projects driving customer interactions, learning how to create conversational copy—and fit them within effective design structures—is an important task.

A good relationship between designers and writers should forge designs that not only convert, but delight and inspire.

How can creatives form that type of relationship and let it prosper? By avoiding these critical mistakes:

Not providing a narrative structure to a designer

Should design start with visuals or copy? The answer is complex and multifaceted, but often the answer can be “neither.” Instead, copywriters should work with designers to provide them a narrative or content structure before they even start on a wireframe.

The main impediment for users understanding copy is legibility and structure. If something isn’t coherent and doesn’t flow from one piece to the next, users abandon it.

Like a school essay, copywriters should give designers some bullet points about how they think the structure for the particular page should flow. It’s important that copywriters don’t just throw in visual suggestions—this isn’t prescriptive.

Look at that. It’s not even complex. This accomplishes two things: providing the designer with a prompt, and ensuring the structure is baked in from the beginning.

It’s typical for designers to come up with a sketch, but including copywriters—and even stakeholders and developers—can go a long way in building trust. For a designer you might not think anyone can provide you with any further input, and that might be true. But it’s important for people to feel a part of the process.

There’s another reason for this: If you haven’t completed the first task of creating a narrative structure, any sketches that copywriters make will have clues baked in for you to follow.

Not allowing designers to write copy

Not only should copywriters let designers write copy, they should encourage it. Inspiration and knowledge can come from anywhere. Just as designers should allow anyone to sketch, copywriters should open the doors for suggestions.

Related: Who should write your microcopy?

Yes, open-plan offices are a pain in the neck. Yes, it can be difficult to get seating arrangements optimal for different teams. But if copywriters and designers are working on a project together, they need to be in proximity. Sitting right next to each other is probably optimal.

Why? Not only will it save on lost time trying to explain little nuances, but it reinforces a subconscious root that you’re both on the same team, working on the same project, achieving the same goal. The more you’re forced to interact with each other on a day-to-day basis—even about non-work topics—the more you’re going to extend empathy.

Not setting milestones (and expectations)

This seems obvious, but within an agile environment many creatives tend to take a laissez-faire approach to this sort of thing. Instead, designers and copywriters need to agree on steps that will take them to a finished design. It doesn’t need to be all-or-nothing, either.

It really doesn’t matter what order you choose, just as long as you’re both involved and you’re both accountable.

“Designers and copywriters need to agree on steps that will take them to a finished design.”

It can be easy to cut a line here or there, or even a word. But when you’re working with such little copy online, every word counts. Small cuts you think are no matter can make a huge influence on rhythm and cadence.

The same goes for design, too. Copywriters shouldn’t be telling stakeholders that they might be able to change a design if the designer isn’t there. Lots of thought and care goes into the slightest detail, and nothing should be taken for granted.

Not conducting research together

User testing is a critical part of any design process, but often designers and copywriters can eschew it altogether, leaving it up to UX researchers.

That’s a mistake. Designers and writers should be involved in the testing process, and they should also be providing alternatives and amending prototypes on the fly, responding to feedback to provide to the next testers in line.

Not only can actually participating or even just listening in on the testing result in quicker turnarounds for amends, it’ll also allow you accountability on each other’s work. If both of you hear that several users can’t understand the copy related to a particular feature, there isn’t a lot of room to move on that.

Not giving the reasoning behind the work

Of all the mistakes you can make as a creative pair, this is the most egregious.

If you’re not explaining the psychology and the meaning behind your work, you’re leaving yourself open to assumptions. Those assumptions could result in detrimental changes:

When you present your work to each other, copywriters and designers also need to delve into the meaning and reasoning behind every single visual decision, and every single word.

And if you can’t explain it? That probably means you haven’t done enough work.

“If you’re not explaining the psychology and the meaning behind your work, you’re leaving yourself open to assumptions.”

Not presenting a united front to stakeholders

If you haven’t explained your work to each other, how on earth do you expect to present a coherent, cohesive position?

If you haven’t, then meetings turn into a mess. Does this look familiar?

Not good. As copywriters and designers, you’re part of a team. That means being together in purpose as well as physical creation. So when you disagree in the room, it’s not only a bad sign for your stakeholders. It just shows you’re not working together.

It’s not all doom and gloom

This isn’t rocket science. Do you want to work better with copywriters or designers? The best way is simple: Put your ego aside. Always focus on the user, not putting your work forward.

If you have that goal solidified as a team, the rest will fall into place. 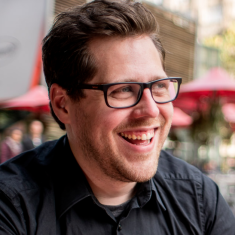