In the summer of 2016, our founder was poking around Linkedin when he stumbled upon a diamond in the rough. A designer with strong, varied experience who had just moved to Chicago.

At the time we weren’t looking for any in-house creatives, but it seemed silly not to, at least, meet with this potential fit. Long story short, a few weeks later she joined the team as our first art director.

“Well, that was easy,” we thought at the time. We were unaware of how lucky we were.

Fast forward to this past summer when that same person announced she was leaving Demo Duck and moving to Washington DC. Once we wiped away our tears, it was time to decide whether we were going to look for a replacement. At first we thought to pause things for a bit and ride out the last few months of 2017 with the people we had in place.

“It’s all about finding the right role at the right company.”

However, after a quick chat with the team and an internal assessment of pending projects, it became clear—we needed someone great and we needed them sooner than imagined.

At that point I foolishly thought, “This should be a cinch!” Having recently moved into a management role at Demo Duck, I figured I could leverage my experience as a recruiter (from a prior professional life) to find someone lickity split.

Related: How to be a standout candidate for that UX job

You can probably guess where this is going. Long story short again, the search for an art director was not as simple as stumbling across one.

There were lessons gleaned from both sides of the table from our recent art director search and given we’re in the height of job switching season, perhaps this info can help creative people (maybe even you) find the right role at the right company.

All images by Demo Duck

Before we jump in, let’s acknowledge that my team and I made some mistakes throughout the hiring process too. There are things we would’ve done differently to find the right person sooner… but that’s for another blog post.

So before you brush off that résumé or jump into that pending job interview, take a few minutes to review the below tips and put your best candidate foot forward.

Here’s what I have to offer.

When we initially posted the art director position, we received a fair amount applicants whose cover letter and résumé hardly addressed any of the responsibilities listed in our job description. That’s not to say they wouldn’t make fantastic art directors—some of their work was magnificent—but it was clear they didn’t have the experience or passion for motion graphics that we were looking for. And if they did, it wasn’t obvious enough to us as we sifted through the sea of applicants to move them forward in the process.

In the creative world, the same job title can have multiple meanings across regions, industries, and even departments at the same organization. Some have direct reports, some don’t. Some are design focused, while others may be motion-centric. Some are entry level while others require five or more years of experience.

That’s why for creatives especially, it’s a good idea to take a few minutes to read through the bullet point of the job description, and if you’re still interested, consider tweaking a few small elements of your résumé or portfolio to match what you read. Speaking of portfolios…

Candidate mistake #2: Not specifying the role you played in your work

We saw some really fantastic work from candidates. But after speaking with them on the phone, we realized they weren’t involved with the specific aspects of their work that we were really keen on, but we had no way of telling by looking at their portfolio because there weren’t full credits listed.

Let’s face it: When it comes to job hunting, creatives have more work to do compared to a lot of other positions. It’s not just the résumé and cover letter. They’ve also got that pesky portfolio they need to clean up/update/create/format/design/etc.

Related: 8 things to know about building a design portfolio

I know it’s already a laborious process, but in your portfolio it’s important to properly list your specific role(s) for the work displayed so that potential employers and recruiters aren’t left guessing. Even if you feel like it’s obvious you did everything, listing it out looks all the better. And if you worked on a larger team, the transparency and recognition provided shows you know how to spread the love—never a bad thing.

Candidate mistake #3: Not having any “bland” work handy

Always put your best work on display.[/invTweet] It’s what makes a great first impression and gives people a look at what you consider the cream of your crop. But as we move candidates further along in the hiring process, we like to be transparent that not all of the work in the role will be something they put on display. It’s just the truth of what we do.

So when we’d ask for examples of work they were proud of but felt a little restrained on, we sometimes found those pieces to be difficult to procure.

If someone had a password-protected part of their portfolio page or even a ZIP file full of this more “routine” work, it would’ve shown a level of preparedness and awareness that goes a long way.

In the off chance a potential employer asks for some creative output from a project with more constraints, you don’t want to be left scrounging.

Candidate mistake #4: Underestimating where you work will end up

In early October, I attended an industry event that wasn’t exactly overrun with attendees. During a break in creative presentations, I had to skedaddle to another event, but later I heard that I missed some solid participant submissions. A couple of weeks later, I received an event recap email that listed a few of the “winners” from the animation “contest” (I use quotes because, fortunately, it was more of a fun exercise than cut-throat competition).

I clicked through the email and loved the runner-up entry. I uncovered the website of that designer, enjoyed her portfolio, reached out, and she was in our office interviewing a few days later… all from a recap email for an event I skipped out on early.

We often hear about the wide reach our tweets, posts, and snaps have (this renewed awareness usually comes after a detrimental viral mishap) but it’s important to keep the same principle in mind for your creative work. Whether it unexpectedly becomes a Vimeo staff pick, gets retweeted by a big name, or has only six faves on Dribbble—[you never know who may stumble across your creative work.

Related: How I landed Cards Against Humanity as my first freelance client

Okay, I’ll admit that this one may be a little more specific to our own process than others. One of the last steps of the Demo Duck hiring process, basically preceding the offer letter, is a creative assignment that gives us a small glimpse into someone’s creative output and lets walk a few short steps in the shoes of someone in the role. This usually isn’t more than a few frames of a storyboard, a single design, or an animated GIF.

What we found to be most attractive to us during this process was people who didn’t use our previous work as canon. Sure, it’s important that you do your research on what style your prospective employer is most partial to. But you should also use this exercise as a chance to work in the style you most want to explore. It helps you stand out, shows where your interests lie, and it’ll be a welcome relief to those reviewing your submission.

We were lucky enough to review a few of these entries. Nearly all were fantastic, but only those that felt outside of the norm remained top of mind days later when hiring decisions were being made.

Candidate mistake #6: Quickly taking what you can get

At the end of what I’ll refer to as “Phase One” of our art director search, we had a candidate turn down the position because they didn’t feel it was the right role for them. As the one in charge of hiring, this bummed me out… at first. After some contemplation, I became appreciative.

When it comes to work, creatives can’t fake it. You aren’t answering emails all day. You aren’t fielding customer service calls. You should be genuinely excited about the potential new role—not just settle for whatever comes your way.

Side note: Always try to negotiate. Just go for it.

As for how our search ended? Nicky, the candidate we sourced from the email recap, actually started as our full-time art director in January (she and our new creative intern, Rohan, created all the GIFs in this post together!). We fully realize how lucky we were to have found someone we felt strongly about, where the feelings were mutual—and we’re super pumped for the road ahead with her onboard.

Making the decision to look for a new career opportunity isn’t something to take lightly, and going through the hiring process isn’t for the faint of heart. Hopefully a few of the above tips can be of help when you embark on your next job hunt. 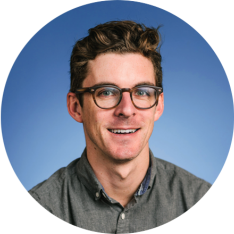